This year we opened the Center for Women’s History at the New-York Historical Society, the first institution of its kind within the walls of a major U.S. museum. Since then, we’ve been sharing the stories of formidable women whose courage, activism, and determination in the face of resistance inspire us all. It’s been a busy year! 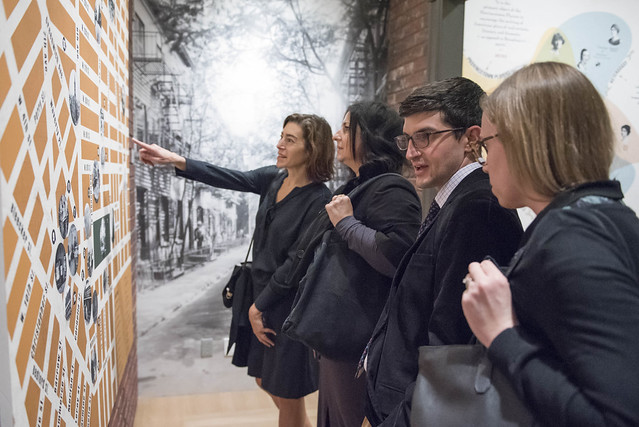 Through exhibitions in the Joyce B. Cowin Women’s History Gallery, we’ve celebrated the work of transformative American women like First Lady Dolley Madison, whose impact on our early democracy has long been overlooked; photographer Editta Sherman, whose unique eye captured American luminaries in captivating portraits; and the revolutionary artists and activists of early 20th-century Greenwich Village now on view in Hotbed, including Jessie Tarbox Beals, Crystal Eastman, and Edna St. Vincent Millay, who fought to expand the roles of women in American society. Just outside the gallery, our wall cases feature artifacts from athlete Billie Jean King, whose legendary achievements in tennis are surpassed only by her work as an advocate for equal rights, and an interactive multimedia exhibit Women’s Voices, which gives voice to famous and forgotten women—and the movements and networks to which they belonged—alongside video commentary from leading historians of women. 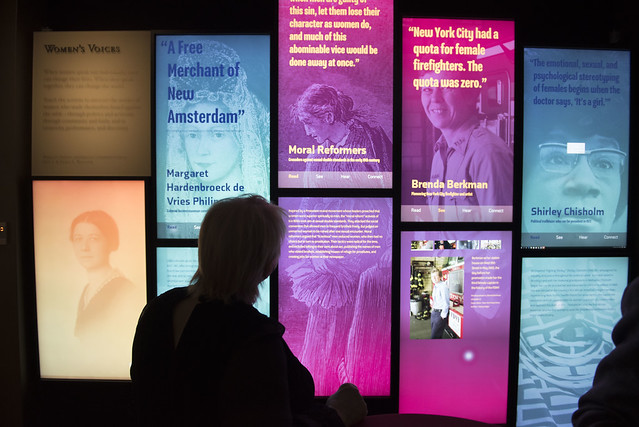 Women’s history is American history, and we are committed to furthering the study and teaching of women’s history at every level. This year, in partnership with our Education Department, we launched the first unit of our new nine-unit curriculum guide for grades 6-12, Women and the American Story. We hosted our second annual Diane and Adam E. Max Conference on Women’s History, a day-long series of discussions and conversations that, in 2016, explored reproductive rights in historical context. We created an early career workshop for 20 doctoral students and recent PhDs studying women’s history, connecting this next generation of scholars to mentors from our Scholarly Advisory Committee. And, in partnership with Columbia University, we launched the first Massive Open Online Course (MOOC) on women’s history, Women Have Always Worked. Created and led by the chair of our Scholarly Committee, Alice Kessler-Harris, this free and open course introduces students to the full sweep of women’s history in the United States.

In the last two months alone, we premiered our new film We Rise, narrated by Meryl Streep and featuring the song We Are Here by Alicia Keys. We Rise highlights the work of activist Addie Hunton, Henry Street Settlement founder Lillian Wald, Tiffany Studios’ head designer Clara Driscoll, birth control revolutionary Margaret Sanger, and other women whose accomplishments in the early 1900s still resonate today. We welcomed journalists Joy-Ann Reid and Irin Carmon for a riveting Women’s History Council Salon Conversation exploring the role and impact of women in journalism, media, and politics today, and hosted Scholarly Advisory Committee members Blanche Wiesen Cook and Lara Vapnek in our Skylight Gallery for a discussion of the “Women of the Village” with our Hotbed curators.

We’re just getting started; our goals are as bold and ambitious as the women whose stories we chronicle. Look for more great exhibitions, public programs, scholarly initiatives, and educational resources from the Center for Women’s History in the new year! And follow us here on Behind the Scenes, where our #womenatthecenter series publishes every Tuesday.

– The Staff of the Center for Women’s History, New-York Historical Society

This post is part of our new series, “Women at the Center,” written and edited by the staff of the Center for Women’s History. Look for new posts every Tuesday! #womenatthecenter

Through interviews, guest posts, and original research, this blog offers readers an inside look at current and upcoming exhibitions and public programs at the New-York Historical Society.

It is fitting that the exhibition Black Citizenship in the Age of Jim Crow coincides with Betye Saar: Keepin’ It Clean, for it is the legacy of Jim Crow that the contemporary artists Betye Saar tackles. Black Citizenship begins with the struggle for equality during the tumultuous years of Reconstruction and ends with the late-19th and 20th century challenges to legalized discrimination that culminated in the civil rights movement. In between appear objects that epitomize the concerted campaign...Read More

Christy Girls and Woman Workers: The Depiction of Women in World War I Posters

Written by Kelly Morgan Last week we looked at a few selections of World War I propaganda posters promoting enlistment culled from the New-York Historical Society. This week, we’ll examine how the posters called on women to support the war effort and utilized female imagery both for the purpose of enlisting soldiers and for their participation in the Red Cross, mobilization efforts, and the newly incorporated Motor Corps. All posters discussed in this blog reside at...Read More

“Just Like Planning a Dinner Party": When Computers Were Women’s Work

This week, we’re examining women’s pioneering role in computer programming. To learn more about tech history made in New York, check out our upcoming exhibit Silicon City, opening Friday, November 13. The show explores early inventions that paved the way for the computer—think electricity, the telegraph—to the Big Apple’s contemporary role as a burgeoning epicenter for cutting-edge tech firms. Who was the world’s first computer scientist? It’s not who you think. Here’s a clue: This person...Read More

Back to Top Back to Overview
Donate
N-YHS Site